Meet our CitySport fitness instructors available for assisting in your fitness goals and personal aspirations, or if you have any questions feel free to approach them for any advice.

Siro was born in Italy and moved to London when he was a kid at the age of 5. He has always been into sport and physical activity from a young age, taking part in various football tournaments and playing sports casually on a regular basis. In 2014, he graduated from university successfully completing his Graphic Design course which led him to build an effective video editing business from home.

Further down the line he decided to pursue his passion for fitness and began studying for his level 2 & 3 (Fitness Instructor & Personal Trainer) qualification which saw him land a role as a Fitness Coach in a commercial gym. There he picked up a wealth of experience, teaching over eight different types of fitness classes as well as successfully starting up his Personal Training business.

You can find Siro on the gym floor during shifts and in the fast class area teaching classes.

Jesse gained his Level 2 in fitness instructing while being captain of Middlesex University Men’s 1st team. That season ended with an undefeated record in the division, promotion to the premier division and runners up in the BUCS Basketball Trophy at Big Wednesday. Upon the conclusion of this season, Jesse turned to boxing and personal training but still uses the knowledge and experience gained across a decade of competitive sport to provide a range of classes and training to suit the needs of a wider audience. Jesse is currently an amateur boxer for Finchley Boxing Club and a Fitness Instructor at City Sport.

You can meet Jesse at the boxing classes, at the fast classes and on the gym floor. 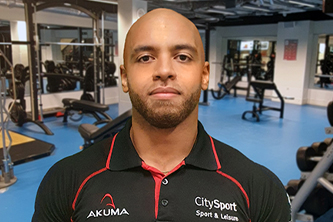 Sam’s fitness journey did not start in the gym, but rather in Track and Field. He competed in 100 and 200 metre sprints in both regional and district competitions, representing East London Athletics Clubs since the age of 15. He eventually had a shot at GB qualifiers by 18, until he suffered a PCL injury, but this did not stop his interest in sports and fitness.

He became a qualified Personal Trainer during his undergrad and has been working at CitySport for 6 years, alongside having a cliental of aspiring athletes and regular gym-goers. His ongoing interest in both Bodybuilding and Strength & Conditioning in sports allows him to advance clients and members to the next level. Wary of his lingering injury, he stays in athletic condition through weightlifting, sprinting and rugby.

You can find Sam on the gym floor and in the fast class area teaching classes.

James is a Level 3 qualified personal trainer with a particular interest in people’s wellbeing. He played representative rugby growing up and was part of Northampton Saints and Saracens Rugby Academy as well as playing for East Midlands region. It was playing rugby he developed his interest in health and fitness.

James has a background working in mental health; running sport programmes to help support people’s mental and physical wellbeing. James’ specific passion is looking at using fitness on a wider spectrum to help improve someone’s overall health and wellbeing. He has worked with a range of people over the years to help make improvements to their lives; both physically and mentally by implementing changes to their training, mental health, nutrition and lifestyle choices.

You can find James on the gym floor during shifts and in the fast class area teaching classes.